10 Words that Changed Our Lives 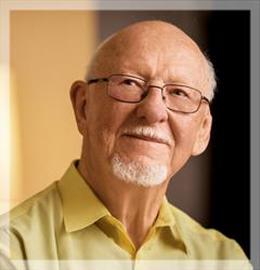 Once again I straightened the For Sale sign in front of our house in New York. Although my wife, Tib, and I lowered the price again and again, two years had passed without a single bid.

To make matters worse, just before the recession hit, we’d bought an apartment in Massachusetts, intending, in our mid-eighties, to move near our daughter. Maintaining both places and paying taxes in two states was shrinking our savings alarmingly, undermining our retirement security.

As I went back inside I remembered an earlier time when a disastrous economy wiped out people’s nest eggs. The Great Depression, as it became known, locked the whole country in fear. We’d been here before as a nation.

I grew up in Louisville, Kentucky, during the Depression, and I saw what financial ruin could do to families.

I remember going with my best friend, Van Varner, to peer—scared, poised to run away—through the window of an abandoned house where a neighbor had committed suicide after the 1929 crash.

I was seven in 1929, too young to be concerned about anything but the changes in my own life. Mother no longer took me to Mr. Coppolo the barber, where I liked smelling the jars of ointment for “Gentleman’s Hair Styling.”

Instead, she perched me on a tall kitchen stool and cut my hair with the kitchen shears. Van’s mother started cutting his hair too. We’d look in the mirror in his front hall to decide whose mother did the worse job.

More serious was the disappearance of school lunch money. Usually I walked to Belknap Elementary with 15 cents in my pocket, just enough for a sandwich, fruit and milk.

Now Mother sent my sister and me off with sandwiches in brown paper bags. No way to save a few pennies by skipping the fruit, to stop at The Candy Lady on the way home for forbidden jawbreakers and Dubble Bubble gum.

I noticed changes in my parents’ routines too. Mother no longer threw away scraps of soap but put them in a little wire box with a long handle, which she swished around in the dishpan to get suds and save the price of a new bar.

Dad stopped driving the Chevy down to the seminary where he taught. Instead, he rode the swaying, clanking trolley, which was slower but cheaper.

I liked visiting the seminary. I’d read the quote carved over the entrance of the big gray stone building: “Lo, I am with you alway.” I liked the way the “s” was left off “always.” God couldn’t spell either.

There was evidence of the Depression there too. Dad loved his Coca-Cola! His office was so hot in those pre-air-conditioning days that the papers on his desk would stick to his arm.

His relief was to walk down to Manny’s newsstand on the corner—once every morning, once every afternoon—and bring back an ice-cold Coke.

One afternoon when I went to Dad’s office I saw a warm, half-finished bottle of Pepsi on his desk. “You get the same amount,” he explained, “and save a nickel.”

Money seemed to be the topic of every adult conversation. One night when my parents had dinner guests from the seminary and I was supposed to be in bed, I crept to the top of the stairs and listened to the conversation down in the living room.

Much of it I didn’t understand, but I followed enough to know that the entire faculty had just taken a salary cut. “Do you think,” someone asked, “the whole school will have to close?”

As the Depression worsened...1930 ...1931...1932...everyone was afraid. Our friends the Carlsons had lived in a mansion with white pillars and a sweeping drive. In 1932 Dr. Carlson sold his mansion and moved his family into a little brick house even smaller than ours.Dad’s fear went all the way back to his own boyhood, growing up during the Great Agricultural Depression that hit West Texas in the 1890s. Dad told us about the dust storms, the dying cattle, the stores closing one by one around the courthouse square in Haskell.

Dad’s father ran the hardware store in town, but hard-pressed farmers no longer purchased new tools. “My father and I dug up the backyard,” Dad said, “and planted a garden out under the windmill. Mother raised chickens. We lived on eggs and vegetables from our own garden.

“I think it would be a good idea,” Dad went on in the controlled tone I’d come to recognize as his anxiety voice, “for us to start raising at least some of our own food.”

He didn’t add “in case the whole economy collapses,” but at nine I was old enough now to understand. Our yard was not large enough to grow anything, so Dad raided his last bit of hoarded cash and bought a small plot out in the eastern part of the county where land was cheap.

There, he and I planted a vegetable garden just as he and his father had done—though we skipped the chickens.

As November 1932 approached, all eyes were on the presidential race, which ended in a landslide victory for Franklin Roosevelt over Herbert Hoover. Our family gathered around the Atwater Kent radio on March 4, 1933, to hear Roosevelt’s inaugural address.

I remember 10 words, spoken in his measured tones, that made us all sit a little straighter: “The only thing we have to fear is fear itself.”

Can 10 words change a nation? Certainly they changed us. The land Dad had bought as a safeguard against hunger, he now began to see in a more positive light. A tumbledown house stood on a corner of it. What if we refurbished it, turned the place into a weekend getaway?

When a federal program was launched to put men back to work, Dad heard that one of the projects was the building of “sanitaries”—outhouses. Dad applied for a sanitary to be dug on our land, and one August day 10 WPA men showed up with their shovels.

They dug listlessly, though. “Never thought I’d end up digging latrines,” Dad overheard one of them mutter.

“Don’t you realize how important your work is?” Dad asked, trying to communicate the new spirit. “Why, you’re preventing disease, safeguarding families!” And sure enough, it did seem to me that they worked with a new energy.

Everywhere, people were being creative about their financial woes. Van’s mother was a single parent now. No longer able to afford a house, she approached real-estate agents with a proposition: “A lived-in place is easier to sell than an empty one. Let me move into an unsold house, fix it up with my own things, and show it for you.”

She and Van occupied house after house, as her selling strategy worked only too well.

Even I came up with an idea. I’d roam the neighborhood looking for the most overgrown yards and offer to cut the grass for ten cents—half the going rate. I didn’t have much time for baseball those summers of ’34 and ’35, but I made a lot of dimes.

The economy hadn’t changed much; it was attitudes that were changing. Those 10 words had identified fear as the voice of the enemy and were inviting us to listen for a different one.

Some attribute this all-important sentence to Napoleon Hill, an FDR adviser. I visited Mr. Hill when he was in his eighties. He rose to greet me, adjusting the crease in his trousers as he sat back down.

A small thing, but I recalled that he’d grown up in a one-room cabin in the Appalachians; perhaps he never took nice clothes for granted.
We talked about that cabin and how, armed with nothing but trust in God and the determination to keep trying, Mr. Hill had carved out an amazing career, including his season as a presidential speechwriter.

When I told him what a difference his words had made to one family in Kentucky, he nodded.

“If I’d looked down at the fear, I’d still be in that cabin. You have to look up to hear the word God has for you.”

And for Tib and me in this current recession? Are my memories of the Great Depression, and the 10 words that pointed the way out, helping us to weather this one? I believe so.

Even before our New York house finally sold (in 2011, after another year of waiting), I was able, some of the time, to take my eyes off the fear and ask God if he had a purpose for keeping that For Sale sign on our lawn month after month.

Now we see that he was saving the house for the particular family who live there, and believe, with us, that God led them there.

We are in our apartment in Massachusetts now. Are money worries behind us? Of course not.

Our apartment complex is for people “62 and older” (much older; I’m 89), which means we’re surrounded by folks with the same financial fears we have—spiraling medical costs and inflation on fixed incomes.

But Tib and I are getting better at looking up instead of down. Most people here are too young to have heard Roosevelt’s inaugural speech. I like to tell them about Napoleon Hill from a cabin in Appalachia.

I tell them too about the words carved above a seminary doorway: “Lo, I am with you alway.” Wasn’t that another way of saying what Napoleon Hill penned? God is with us—in good times and in bad.

That has been the case forever. We just have to remember to look up and notice.

10 Words that Changed Our Lives by John Sherrill is copyright 2012 by Guideposts, Carmel, New York 10512. All rights reserved.