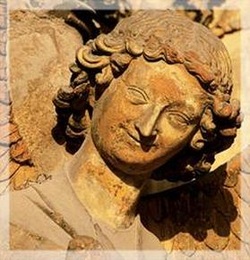 I wasn’t entering the Cathedral of Rheims as a sightseer that April morning in 2009, I was looking for a corner of the great dim interior where no one would see me cry.

What a difference from my visit here the day before! Guidebook in hand, I’d spent two hours reveling in the history of this spot where French kings had been crowned ever since 816.

The present cathedral, considered by many the most beautiful in France, dated to the thirteenth century. Carvings, soaring columns, glorious stained glass... I walked out of the cathedral marveling at the skills of medieval craftsmen.

Outside, I saw a cluster of fellow tourists snapping pictures of a sculptured angel in one of the entryways. But this entire west front was dense with statues—kings and queens, saints and angels.
Especially angels, so many that Rheims is known as the cathedral of angels. Why did this particular one attract such attention?

Stepping closer, I recognized it. Of course! This was the famous Smiling Angel, whose picture I’d seen all over the city. In shop windows, on souvenir key chains and dinner sets, on postcards and champagne bottles.

I stared up at the 8-foot-tall original chiseled by some anonymous carver in 1250. Wings wide, it smiled cheerfully down at us. “I could almost catch a twinkle in the eyes,” I told my husband, John, when I joined him at our hotel.

Next morning it was my turn to make the daily call to our home phone for messages. Since calls from hotels were expensive, we used public booths and a phone card.

So it was in a telephone booth opposite the cathedral that I learned that John’s sister, his only sibling, had died the previous evening.

Mary. That brave and gallant lady who, now that her husband’s Alzheimer’s was too advanced to handle at home, had moved with him to a single room in a nursing home. Who, with a long career in counseling, was volunteering her skills to depressed or lonely patients in the home. Whose piano playing in the lounge cheered the staff as well.

While John tried to reach Mary’s children, I headed for the nearest entrance to the cathedral. Right away I wished I’d chosen another door. I was in no mood for a statue with a silly smile. A smug, uncaring grin indifferent to human grief.

The tears I’d been holding back came as I pulled open the heavy door and stepped gratefully out of the sunshine and the sight of that smile. I sat for a long time, remembering our recent trip to Virginia to see Mary, her loving care of the husband who no longer knew her.

And maybe because I wanted something to be mad at, I fixed on that smirking angel. Its breezy other-world attitude seemed to say, Human problems cannot touch me.

It wasn’t till days later, on the plane flying home, that I opened the books I’d bought at the cathedral shop and learned why I was wrong about the angel.

I’d wondered what made this one so popular. For nearly 800 years, I discovered, it wasn’t; it was just one of hundreds in the cathedral of angels.

Then came World War I. Rheims, at the northeast edge of France, was quickly occupied by German troops. Just as quickly, a French counteroffensive drove them out: “We freed the city,” one author wrote, “and we doomed it.”

Because the retreating Germans did not go far. They dug in only a few miles away and from there, for over four years, shelled the ancient city with hardly a day’s letup.

The worst damage to the cathedral came on September 19, 1914, when it was struck by 200 incendiary shells.

The oak roof caught fire, the lead plates melted and a rain of molten metal poured down to the floor, igniting the piles of straw brought in as bedding for wounded soldiers.The north tower was encased with wooden scaffolding for repairs begun before the war. Soon the fatty pine was on fire, blazing timbers crashing onto the statues flanking the door.

The head with the smile toppled to the pavement 14 feet below and smashed into fragments.

It was days before anyone sifted through the rubble of the statues. Though officials pronounced the damage irreparable, the larger shards were taken for safekeeping to the cathedral crypt, while sandbags were stacked against the figures still standing.

Occasionally someone would sort mournfully through the stored pieces, try to identify them and assemble them according to which statue they’d belonged to.

It was during one such effort, in November 1915, that someone picked up a hunk of stone and thought he detected part of a lip curving upward in a smile....

That same year, three more fragments of the head were located: the chin and two segments of sculpted hair. In 1916, five more pieces were identified.

Then in March 1918, the Germans launched a massive forward drive and the entire city of Rheims was evacuated. Along with the population, any portable piece of the ruined cathedral, including the statue fragments, was transported away from the front.

In the confusion and haste of the moment, no one knew where particular items had been taken. Possibly to Paris—to the Trocadero. Or to the Pantheon. The Musee des Beaux Arts. The Louvre. Or out to Fontainebleau, or even to a convent in distant Dijon.

After the end of the war the statues’ remains were finally located, only to find themselves at the center of a raging debate. Many people thought the Cathedral of Rheims should remain forever a ruin: a reminder of the madness of war.

Others wanted it left not as a place of bitterness, but of mourning. It would be maintained as an ossuary, a “cathedral of the dead,” where the bones of the millions who had died in the nearby trenches would be enshrined.

Still others took the opposite view: Everything that could possibly be restored, should be. The cathedral should be a monument not to death, but to resurgent life.

And what better symbol of victory over loss could there be than the just-discernible smile on a broken head?

The restorers prevailed and the effort to rebuild the shattered angel became the symbol of France’s own struggle to recover. When the sandbags were removed from the cathedral’s west front, a thorough but futile attempt was made to find more fragments of the head.

Nevertheless , in 1921 a sculptor set about reassembling the existing pieces. By 1925, he’d restored the forehead, part of the nose, and the right eye.

In 1926 the missing pieces were filled in with a mixture of stone and cement, and the head was reattached to the body. Once more the statue, now known everywhere as the Smiling Angel, greeted visitors to the cathedral gradually resuming its grandeur.

I looked out the plane window and thought of the visits ahead with Mary’s children. The angel’s smile that I’d mistaken for indifference seemed now the message we need most to hear in a time of loss.

"Overcome Fear with Faith" by Elizabeth Sherrill is copyright 2012 by Angels on Earth, Carmel, New York 10512. All rights reserved.