Remembering What it's Tempting to Forget 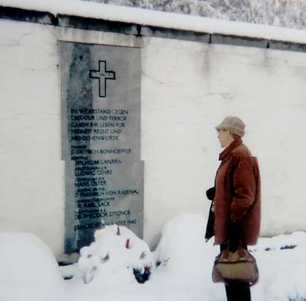 Elizabeth in the Flossenburg compound where Bonhoeffer was hanged.
In April of 2006, Guideposts ran a story I wrote about Dietrich Bonhoeffer, a Lutheran minister and one of the few German clergymen who took a stand against Hitler. The mail I've been receiving is revealing. Some readers had "heard of" Bonhoeffer, but weren't quite sure who he was, others -- mostly people under 40 -- had never heard his name at all.

This is why I've decided to post, as this month's featured article, the story of a young girl growing up in Nazi Austria. [Click here to read Helene's Story.] I think it's terribly important that we not forget, as the years pass, the monstrous regime that came to power in the 20th century there and in Germany. Not because Germany and Austria are more prone to totalitarianism than other countries, but precisely because, when sufficient fear takes hold, every nation, is capable of demonizing whole categories of people. If an educated electorate can put a Hitler in power, if the homeland of Luther, Bach, Mozart and Goethe, saints and poets, philosophers and scientists, can revert to savagery, then no country is immune.

John and I have had an excruciatingly painful and personal exposure to the Nazi horror, starting for John as a soldier in World War II. Since then, beginning with research for The Hiding Place, we've visited the concentration camps, met the survivors whose stories haunt you forever. Then last December, researching the Bonhoeffer story, we went for the first time to the elimination camp at Flossenburg, where the minister was hung.

Each time you encounter systematic, government-sponsored cruelty, the shock is new. Each time you marvel at the willful ignorance of ordinary people in the vicinity -- Flossenburg is a few minutes' walk from the center of a pretty village -- you tell yourself you would have been different. You say to yourself, I wouldn't take part in torturing another human being, or, I wouldn't stand idly by. But then I, personally anyhow, have to ask myself, Would I? Could I? If the rationale for torture was said to be for some noble cause? If not one of my neighbors -- people I love and respect -- felt as I did? I can pray, surely, that my answer would still be "I wouldn't."

But I can't be sure.

It's somehow easier to avoid seeing myself in the atrocities of the dictatorships in Russia, or China, or Cambodia -- I tell myself "they" were never democracies. Or "they" had never heard the teachings of Jesus. The milleniums-long history of genocide in every part of the world -- well, all that was long ago, we're civilized now. The more recent massacres in Armenia and Rwanda, for just two examples -- different cultures, different values from ours. With Germany and Austria, though, I confront a mirror held so close I can't escape my own reflection.

The hopeful thing, the only one, that John and I have taken away from shattering visits to Dachau, Buchenwald and the rest, is to see groups of young Germans, college students, youth clubs, all ages from early teens to young marrieds, somberly touring the facilities their grandparents set up to eliminate "undesirables."

It's easier, and pleasanter, to forget this history. Germany has decided not to. Dear Father of us all, help us too to remember!