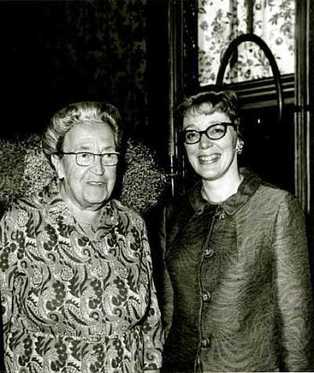 Probably the question I've most often been asked, in the 41 years since The Hiding Place was first published, is, What was it like to work with Corrie ten Boom? Often asked in a tone of awe, as though it must have been unlike other writing projects. "To me," a woman said to me recently, "working with such a saint would be like spending time in heaven!"

Working with Corrie was always stimulating, I told her, always rewarding -- but not in the least like being in heaven! Corrie was indeed a saint, and saints in my experience are the people most passionately concerned with contemporary events on this earth.

I remember the first time she came to stay at our house in the New York suburbs -- our interviews till then had been in Holland and Germany. Our teenage daughter Liz was giving "Tante Corrie" her room; Liz and I emptied drawers, put lace-edged sheets on the bed, extra hangers in the closet and fresh flowers on the dresser. John drove to the airport while I got dinner ready, and swept the front steps (Dutch steps are spotless.)
I doubt if she actually saw our house at all, the ten days she spent there.  Like all of us, Corrie "saw" what was important to her. And of course the choices a nation makes at the polls are more important than fancy sheets on a bed.

Corrie cared, as God cares, about the state of people's hearts. I don't think she noticed a single object in Liz's room, but she spent hours there with Liz, asking about her school, her friends, her dreams, her fears. I'm sure she couldn't have told you, a month later, whether Liz was blond or brunette. And I'm also sure that a month later she prayed, as she'd promised, for Liz's algebra exam. What mattered to Corrie was the person himself, not the house he lived in or the clothes he wore.

Which presented a problem to the writer. What was it like to work with Corrie ten Boom? Like trying to get a blind man to describe the colors of a garden he'd once walked in. "Corrie," I would say, "describe Mr. Koornstra who got you those extra ration cards."

And with that tone of finality that only Dutch-accented English can convey: "He was a man."

It was that way with clothing, streets, houses. I remember my mental image of the Beje, the family home which became "the hiding place," before I went to Haarlem and saw it for myself. "It was a small house!" Corrie kept saying -- clearly pleased to provide this physical detail, since I seemed so keen on them.

But as I tried to envisage the various floors -- a short stairway from her bedroom down to a hallway where there were four more bedrooms, down again to her parents' bedroom, a long staircase down to the dining room, another to the back door, a "few steps" up from the dining room to "the front rooms" -- I was picturing an American-style split-level, growing ever larger as the room-count reached thirteen. A detail Corrie never mentioned  was that the house was only one room wide.

Day after day the annoying questions continued. How high, how wide, how old, what color, what did it sound like, how did it taste. "What does it matter?" Corrie would demand after failing once more to recall a single specific about a dress she'd worn or a prison cell where she'd been held.

"It doesn't matter," I'd agree, "in the working out of God's purposes for mankind. But it matters for the paragraph I'm working on."

It was not the first time John and I had interviewed someone who ignored the small things in order to be effective in the large ones. We fell back on what we call "peripheral" interviews. There's usually someone -- a wife, a neighbor, a friend at work -- with an eye and an ear for specifics. Corrie's nephew Peter had an exceptional memory. So did Meyer Mossel, "Eusie" in the book. So did a friend who as a young man had worked at the police station near the Beje. Corrie also had photographs of family and friends. And of course I was able to visit many of the locations myself.

Though resisting all this prodding for "unimportant details", Corrie remembered our fondness for them. A year or two after the book was published we had a postcard from Uzbekistan.

I am in a room with yellow- and
green-striped walls, a green rug, and
a bedspread with white flowers.
The room is 12 feet long and 10 feet wide.
Am I not a good girl?